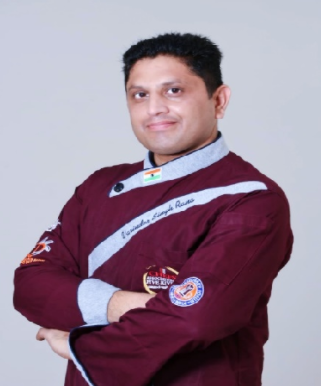 Dr Varinder Singh Rana is presently Dean of School of Hotel management, Airlines and Tourism at CT University, Ludhiana. He has received his Doctorate (PhD) in Hospitality from Amity University, Noida and postgraduate in Hotel Management and Catering Technology from St Peters University, Chennai. He obtained his Bachelors in Hotel Management from Bangalore University in 2001. He has over 19 years of experience in Academia and Industry. He has provided his services to GNA University, Lovely Professional University, Punjab Tourism Development Corporation and various reputed hotels. He has seven Limca Records in his account. He is General Secretary of Chefs Association of Five Rivers which is the nodal body of Indian Federation of Culinary Associations (IFCA). He is the member of Board of Management of GNA University and Board of Studies member of various Universities. He has authored 12 books and 22 Research papers. He has served as head chef to honourable President of India and President of Republic of Afghanistan during their visit to Punjab. He is certified Master trainer of Food Safety and Standards Authority of India. He has been awarded by Phagwara Administration for outstanding professional work in 2017. He also got Star Achiever Award for regional culinary development from Indian Federation of Culinary Associations. He has also been honoured by Tourism Minister of Punjab for initiating a Bakery Unit at Central Jail, Ludhiana. He has shown his presence as Jury of Master Chef Punjabi-A Cookery Reality Show of DD National Punjabi. He is doing various cooking shows on National Television. He also represented State of Punjab in Republic day Celebration at Red Fort, New Delhi. He has served Jury in ICF and IFCA events at National and International Level. He has been awarded with Best Culinary Educator award by Indian Federation of Culinary Association (A Nodal Body of Ministry of Tourism, Government of India). He grabbed Two silver Medals and one bronze medal for Republic of India (Our Nation) at International Culinary Challenge, Uzbekistan where 22 countries participated. He has been associated with many projects of Punjab Heritage and Tourism Promotion Board (PHTPB).